Pie king and queen building pies and lives in Yackandandah 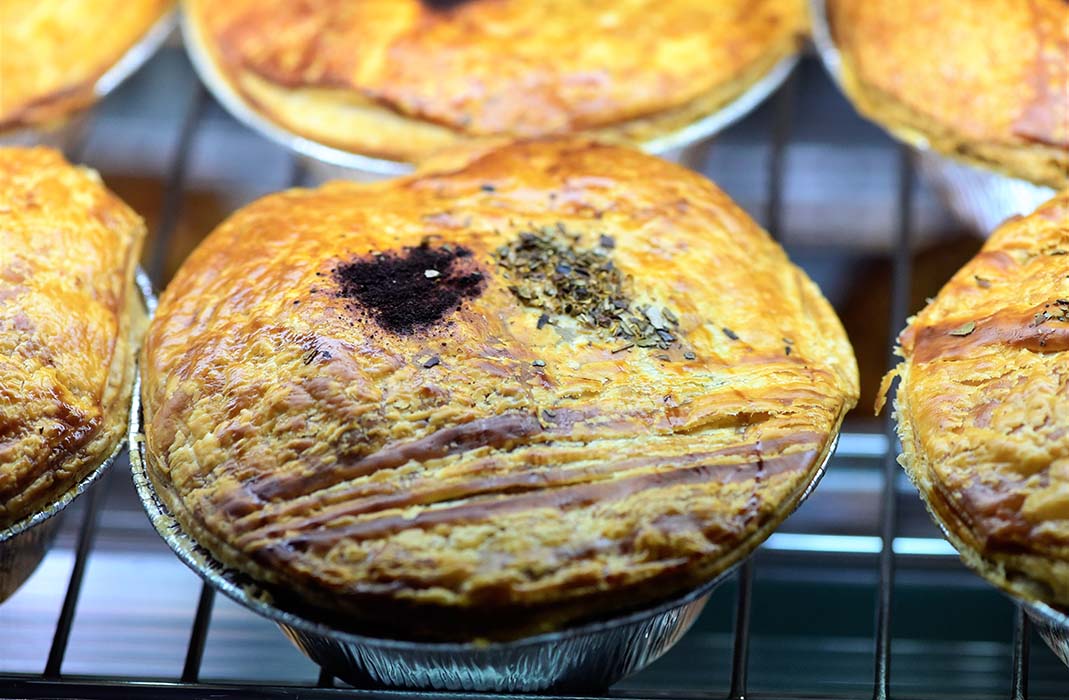 The only time Sebastian Nedziak becomes serious is when he recalls explaining to people that opening three thriving businesses with his wife Melinda hasn’t been the quick easy road that some may think it is.

It  doesn’t last long though, before he is back to his boisterous joking self. It is easy to immediately see how the couple found each other on the streets of Sydney – despite their differences they are mirror images of energy, enthusiasm and determination.

Sebastian was born in a tough mining town in Poland – home to Europe’s fourth biggest coal mine and a massive power station. His family of five lived in a one bedroom apartment, all sleeping together in the three metre by four metre bedroom, with beds that folded to the wall to make space to live.

“The teachers used to say ‘Study harder, or you’ll end up as a nobody,’ but I said I don’t need to study hard, I’m going to go and live maybe in America or Canada, I’m not staying here!” Sebastian says.

Melinda’s family had been in Yackandandah for about 150 years and she was raised in various locations around Australia when her family left the North East to become a part of a church mission group. The family survived for 22 years on mission donations until her parents returned to Yackandandah, and Melinda & her sisters set up their lives in Sydney.

“I studied to be a teacher, but took a break after I graduated and worked odd jobs in a hardware store, for Big W and a bank,” Mel says.

“I was looking for somewhere to live & I moved in with a girl who advertised in the paper for a room-mate which turned out to be Sebastian’s sister.

“A year later Sebastian and I were married and we travelled Europe for a year.”

Discovering a passion for food

Sebastian had left school at Year 8, moved to Greece with his family and followed his passion for food, training in a five star restaurant to be a chef.

“I grew up in a communist country, where we used to eat meat once a week on a Sunday. Grandma used to boil the chicken for soup and then the second course was the same chicken, pan fried. It was dry as dust!” he says with a laugh.

“Now I cook a tonne of meat a week for our pies, but never with grandma’s recipe! It’s a bit of a contrast to when I grew up.”

Sebastian moved to Australia in 1996 and cooked for while, before putting his impressive frame to good use as a bouncer in Kings Cross for five years. 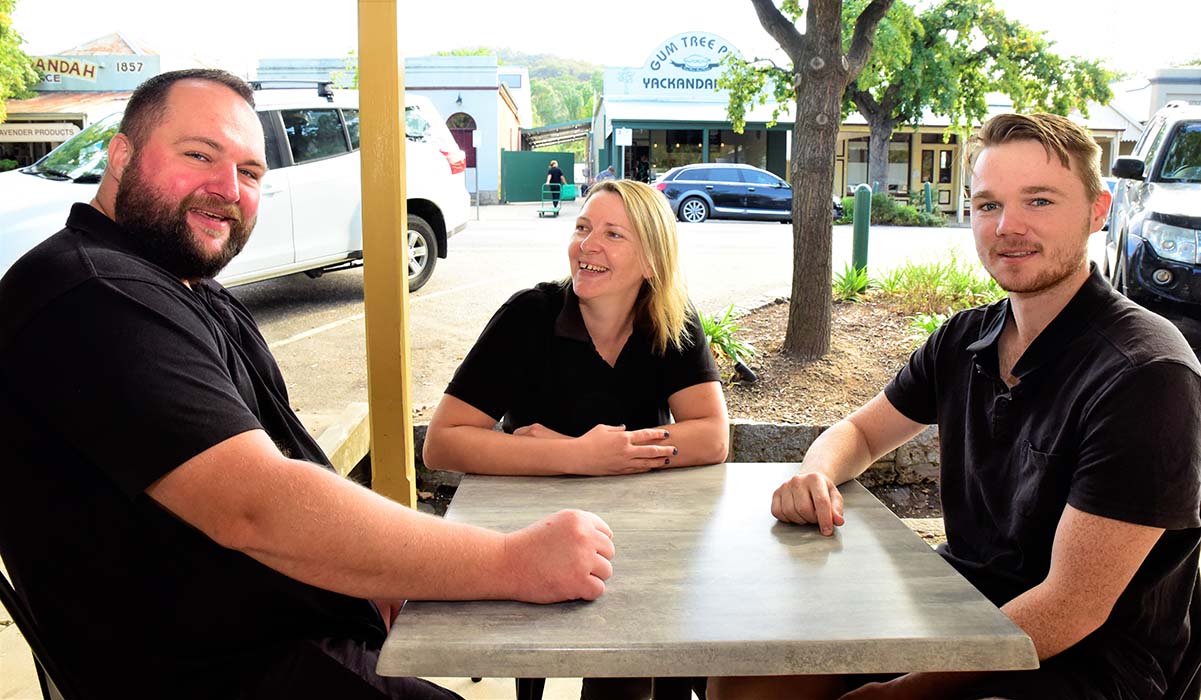 A love affair begins – with Yackandandah

‘’When Melinda took me to Yackandandah the first time, she brought me here in the middle of the night and I had never seen it so dark before,” Sebastian says.

“She was driving very fast on a dirt road with no street lights and I had no idea where we were. When I woke up the next morning and took a look around I was amazed. Green hills, cows, dams, I just fell in love! I said to Melinda, we need to raise our family here.

Their first café involved working huge hours for little return. Based in a nursery out of town, it was only busy at the weekends and after three years, they weren’t making any money and had to make a decision on what to do next.

“I was hugely stressed, but I’ve got one of the personalities, I won’t give up,” Sebastian says.

“The locals loved the pies. We had been getting a commercial frozen pie and serving them and they weren’t very nice, but my sister-in-law suggested I try making my own. So I started making them fresh and everybody loved them. Then a guy kept coming up saying we should sell them cold, so on day I put six pies in a pizza box and sold it to him and then more people came and asked if they could get them cold too. That started the whole thing, listening to the customers.”

The couple got out of the café, and started selling pies at markets. 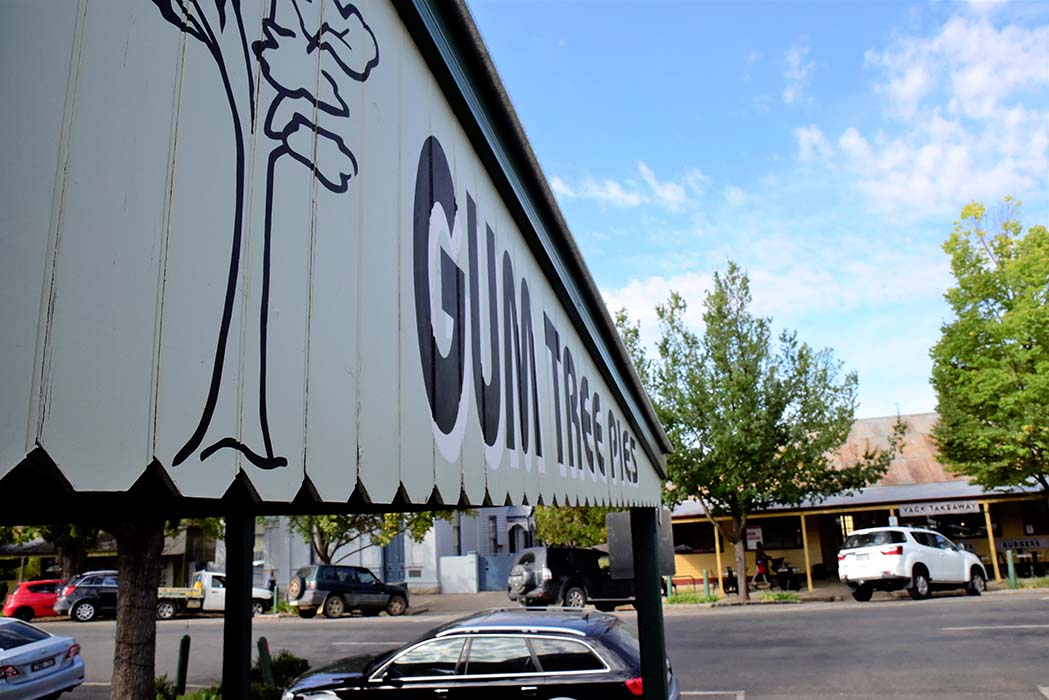 “We had a $10,000 credit card that we hadn’t used on 27% interest, so we bought a car for $5,000 and dad put a cool room in it, then we bought ovens and a pie warmer in my brother-in-law’s trailer and started cooking in a camp kitchen we rented,” Melinda said.

A long process of cooking and going to markets across Victoria each weekend followed, repaying the credit card debt and building up savings, over several years. In time, they found a niche in a Canberra market and still continue to sell 1400 pies in three hours every week there. But with two kids and after many long nights driving, sleeping under the van or huddled in the cab, they decided to set up a shopfront in the main street of Yackandandah.

Fast forward three years, and the couple have opened a second Gum Tree Pies store in Bright, also at Yack Takeaway just over the road from their flagship pie store and a state of the art pie making facility – where all pies are still made by hand, using the recipes that have only recently been committed to paper after being levered from Sebastian’s memory.

“We have 37 staff and many of them are juniors. It’s one of the most satisfying things in a small town, to see young people come through. We had one staff member recently who had saved up $30,000 in three and a half years,” Melinda says.

They also introduce a young man behind the counter.

“Codey was one of our first staff members and we couldn’t have done it without him. He started as a junior at our original café when he was only 15,” Melinda says.

“After working in other businesses for a few years he found his way back to us when we opened our first pie shop. Then he went on to manage the Bright store when it opened and moved there, making great connections in the community and now is manager of our takeaway, getting it going.

“We are opening a store in Beechworth soon, and he will manage that as well, we just trust him absolutely.

“We worked it out one day and realised we could actually make more money if we closed all the shops and just sold pies at markets, but it’s not about that. We love being a part of the community and a big part of what drives us on is knowing that we are helping provide jobs and a stable income for all these people. That’s really rewarding to us at the end of the day.”

For more information, or one of Australia’s best pies
Visit Website
Previous Gippsland hub set to reclaim limelight Next The dynamo that every rural town needs