Secret ingredients for a generation of classroom fun 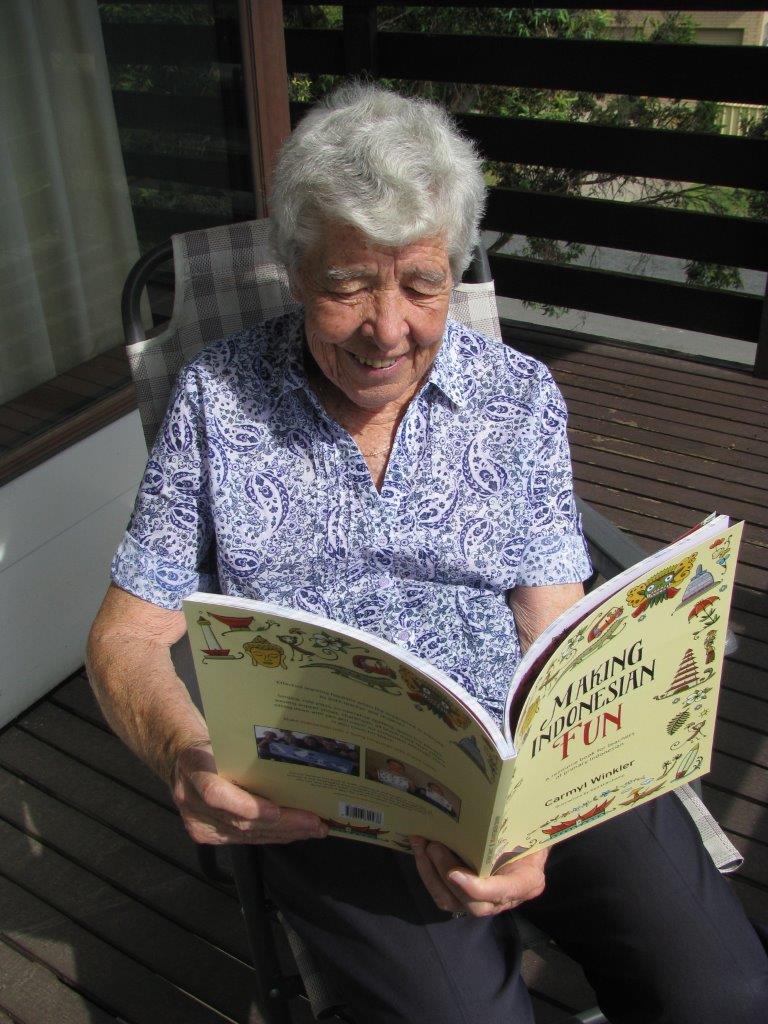 After introducing thousands of children in northeast Victoria to the language, culture and of course the food of Indonesia, Carmyl Winkler has condensed her most successful lesson ideas from her 25 years of teaching Indonesian into a new book.

Launched this week in Tallangatta, in North East Victoria, Making Indonesian Fun draws together lessons learned delivering the fundamentals of Indonesian language to some of the State’s smallest schools – as well as many larger ones.

Demonstrating that education innovation and cultural leadership can be found in many small towns, the book is the culmination of Carmyl’s career, leading professional development programs for more than 300 teachers and regular classes for students across 10 schools.

The teaching vocation came late to Carmyl and almost by accident, after a remarkable and varied career as a nuclear physicist, youth worker and parent.

She had fallen in love with Indonesian culture in her 20s, when she and her husband Don lived and worked in the remote north Sumatran province of Aceh. Decades later, after running informal Indonesian language classes for adults from her lounge room, Carmyl was asked to deliver some lessons at Tallangatta Primary.

“The first years were challenging as there was virtually no curriculum and few appropriate textbooks, so I had to develop each lesson from scratch,” Carmyl said.

“It was quickly obvious that learning happened when children were having fun – singing or playing games. I decided to try to fill the void so that teachers could use the resources, developing a tape of 14 songs and a book of ideas, which soon sold out.

“After teaching a generation of children, making videos and putting on concerts, I wanted to capture the games and activities that have really worked, year after year, so teachers can use them, so I sat down and wrote Making Indonesian Fun.

“I have taught in many one-room schools and was particularly keen to develop a book which would be useful to smaller rural schools, where they can’t get access to a language teacher but want some easy to follow, pre-tested ideas.”

The book was launched just a few doors down from Tallangatta’s community shop, The Hub, where Carmyl’s first book was launched 41 years earlier – a cooking book for children called the All-By-Myself Cooking Book.

As each of her initiatives, the All-By-Myself was a benchmark for country ingenuity – creating a book when the local library couldn’t supply one.

“My children wanted to cook, but the only recipe books available in the library were based on condensed milk and marshmallows. I could see there was a need for a book that children could use to cook real meals - as well as the occasional frozen lemon crunch,” Carmyl says.

After compiling the manuscript over about a year, Carmyl couldn’t find a publisher, but undaunted, printed and published the All-By-Myself cooking book herself.

Sold by mail order and word of mouth, the All-By-Myself notched up a remarkable 6,000 sales, mostly to country children across Victoria, whose families came to know the seven-layer casserole and chocolate cake recipes all too well.

Making Indonesian Fun is another proudly self-published book from a small Victorian town, and is available at the website www.teachindonesian.com

Previous If our future is going to be fair, you need to stop and look at this iced coffee.