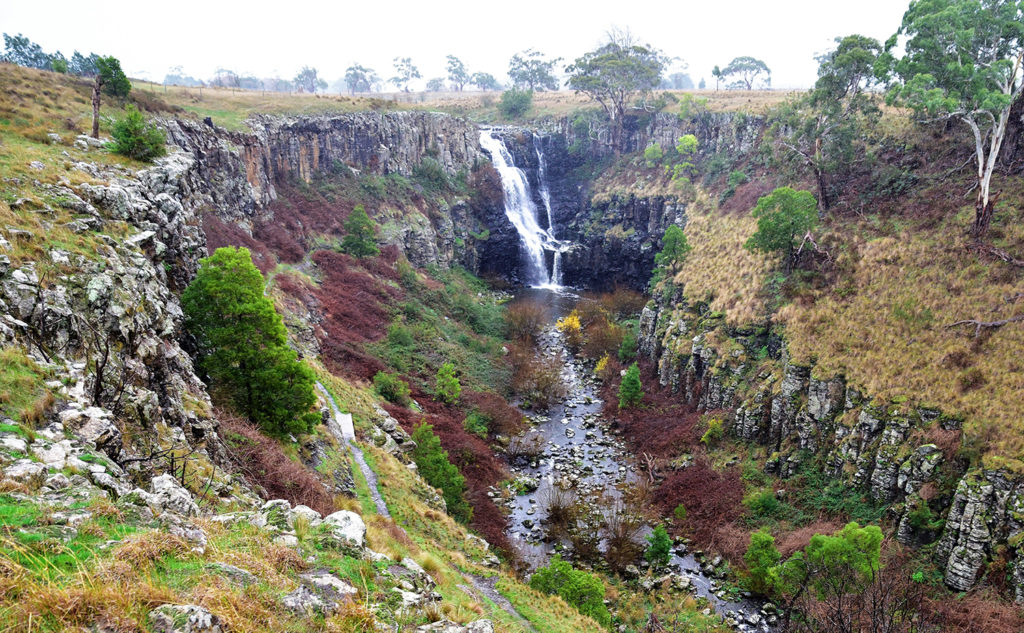 Despite the torrential rain I get out of the van and splash across the grass to an excessively fenced off ridge line, where you can get The View.

Moorabool is the missing piece in our jigsaw – the only one of the 37 rural council areas that we have not yet visited for the LiveCountry project.

I could have found an open fire in a Ballan café or a builder working on the interior of one of the hundreds of new houses in Bacchus Marsh to wile away the day, but I choose soaked jeans and wet boots at Lal Lal falls because the little house a couple of hundred metres away is where I first understood the beauty of living in the country.

My sister Bronwyn was eight years older than me and when she moved away to uni, we didn’t know each other well. A decade or so later, we discovered each other as if for the first time; me seeking respite from uni, her a kindergarten teacher, living with her husband in a farm house they’d rented out at Lal Lal.

I only visited a couple of times, but the best of what we had followed as B, as she was known, moved to other rural locations. The ready laugh. The home-baked goods ready to go as soon as we arrived on a Friday night after a long drive from the city. How we would chat for a couple of hours, way into the night, sharing stories and news.

Saturday would be more chatting, talking to the kids. There’d be a walk in the afternoon and then more beautiful time in the evening, usually near a fire, together.

Sunday would be church, church morning tea, and then head home after lunch.

The backdrop didn’t matter. At Lal Lal, the walk would be to the Falls, reflecting on how they looked different with the changes in the seasons. The time with the kids didn’t happen then, because it was before kids, and instead we headed off to Ballarat. Only there was that one time, probably in Spring, and B pulled off the road about a kilometre out of Lal Lal with a scream, because a huntsman had emerged beside her shoulder from the back of her beloved old Hillman. One of us in the passenger seat, one in the back, and Bronwyn shrieking at the spider, before a journey punctuated by gales of laughter as we relived the moment. The house was pretty crappy, it wasn’t convenient to get there from anywhere, and they moved after a little while - but experience that I loved continued, wherever they were.

When they moved to Yarrawonga, the walk would be past some construction sites, so the kids could play on the diggers, or around the lake, to a pond that now bears her name. She wheeled out the same wattage of love and attention to loads of people, and upon closing the door and heading home, each felt they had carved out a special relationship – and had a special role as an extension of her family.

In Albury, the walks became shorter, the slice occasionally bought or gifted rather than home-made, the children taller – but the gilt bond remained, even when the talks sometimes fell silent.

It’s been a whole set of years since B lost the epic sequence of battles she and her oncologists had waged. Lal Lal has been gifted some giant windmills, but otherwise hasn’t changed. While the physical presence of B is gone, the best of the country that she embodied remains.

Shared stories, the special camaraderie of constitutional walks, the sacred moments that you share with strangers across the rim of a coffee cup. And the knowledge that somewhere, behind closed doors, there’s a comfortable chair and an eager ear waiting for your arrival. That’s why you should think about moving to the country. You can find all this in the city, of course, but it’s so much easier to find a welcome and a landscape that is as if it has been created with you in mind when you are in the country. Of course the welcome is just the initial expression of warmth that you see when you appear in a country town; but once you accept the welcome, and engage with people in return, the sense that you get – that sense that you would rather be nowhere else at this moment – is far more important.

It’s a true gift to discover a new place where you belong.